As you are aware, GNYHCFA along with all of the New York State Nursing Home Associations, came together and filed an Article 78 lawsuit against the New York State Department of Health to prevent the 7/1/19 Medicaid Rates, with a new CMI methodology, from going into effect.  On November 1st a hearing was held in NYS Supreme Court, Albany County.

This afternoon, Justice Kimberly O’Connor issued a preliminary injunction preventing the new CMI methodology from going into effect.  This injunction is in effect pending final resolution of the case.

We will continue to update our membership as information becomes available.

Thank you for your continued support,

A mid-year cut of this magnitude can not be absorbed by any home without disruption to the care of its residents and increasing the already difficult financial burden faced by many homes.  A financially tenuous nursing home will be devastated by such an action.

Providing quality care for the elderly and the disabled is the backbone of a nursing home’s mission. A budget action of this size severely jeopardizes the home’s ability to provide that level of care and jeopardizes the very strong partnership that the nursing home industry has forged with the State over many years. 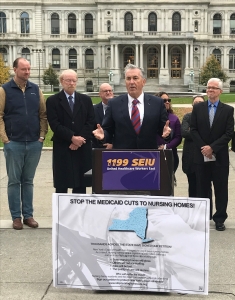 Dr. Scarpa of Vestra Care presented the Telistat technology at our seminar “Providing Integrated Healthcare and Improving Outcomes” on June 21, 2018. We wanted to share the latest innovation update for Telistat.

“This patch is quite literally, a life-saver, and it will allow our patients in skilled nursing facilities to dramatically reduce the amount of money, time, and energy expended to treat their chronic condition. Better yet, they will be able to stay home. They will be able to communicate directly with the ‘war room’ through their television, laptop, tablet or cell phone. It is a harbinger of medical care to come.”